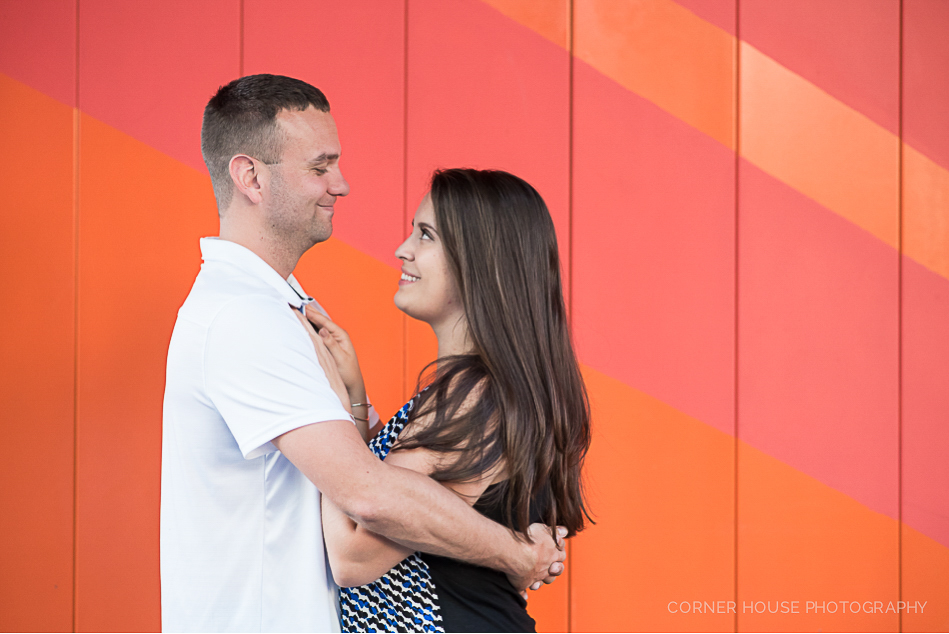 Jessica and Tyler met me out at Universal Orlando City Walk for their theme park inspired engagement. The two love spending quality time together having fun and enjoying date days at the park riding rides, dining out at CityWalk, and just having a blast together.

My sweethearts actually met at Ball State University in Indiana when they were both in graduate school. The professor had asked the class to share where they were from and where they went to undergraduate school. Ironically enough Tyler and Jessica both went to Midwest and both were from Wisconsin. Of course this immediately sparked Tyler’s interest and when he walked up to Jessica after class to ask the big question – he knew she was the one – oh and of course that question wasn’t if she would marry him quite yet, but even bigger… was she a Packer’s fan? Haha… of course she was and so their friendship began!

The two quickly bonded over the Packers and late night studying. Their friendship turned into a beautiful romance filled with a ton of fun and laughter. I have to say that Jessica and Tyler are one of my silliest couples and I truly enjoyed every minute with them. Tyler’s playfulness in making Jessica laugh is absolutely contagious and I just love how she keeps him on his toes. As Jessica explains her love for Tyler, he “has a great sense of humor, so he always keeps me laughing.” From catching up on their favorite TV shows to date days at the parks, she always has fun spending time with him. Tyler loves how Jessica cares for him and loves him for who he is. As he simply puts it, “she’s my best friend.”

Tyler knew that Jessica was both his best friend and soul mate. Jessica was very special to him and he wanted to make their proposal memorable by including a special lady in her life, her mom. Jessica’s mom was in on the secret the whole time and after picking her up from the airport on Mother’s Day, they three of them headed to a local park near in Mount Dora. While walking along taking photos, Tyler dropped to one knee and asked for her hand in marriage. Of course mom kept snapping and caught it all on camera! Jessica of course said “yes” and the wedding planning began!

A new little ‘segment’ as you could call it in my love stories that I have been adding is the best and worst piece of advice my couples have received when planning their wedding. Both Tyler and Jessica’s best and worst piece of advice just so happens to be “opposite ends of the same coin.” As Tyler explained, he was told that they should plan the wedding to be what the two of them wanted, however at the same time they also receive advice that what they want should be to impress everyone. It is interesting to me, because I don’t think being overzealous or over the top with spending means it will impress others nor does it mean it will keep true to yourself if that is not what you want.

Similar to Tyler’s advice, Jessica received advice that has pros and cons. She explained that after being told to visit wedding shows, she realized it was both good and bad. Yes, you get to learn about different options, but there are almost too many options and it becomes incredibly overwhelming. Both learned though that the best thing you can do regardless of what advice you receive is to “go with your gut,” because only you and your fiancé know what you two want for your wedding. I couldn’t agree more.

Wrapping up our theme park session, I just had to know – what was with the backpack! Tyler had been carrying it around all day and I finally learned it was actually a prop for their session. The two take the black and red backpack with them when visiting the parks or going on picnics. It has become a symbol of fun and has been part of many memories they have shared. As Tyler explains it, “we never leave home without it!” And the parks, well the location was my darlings pick because it was the first trip they ever took together. Both being Harry Potter fans, they decided to go to Islands of Adventure and experience the city of Orlando together. Fast forward to a few years later and they both now live in the heart of the city enjoying good times and making many memories on the weekends where they shared their very first trip together.

Looking forward to capturing these two tie the knot at the Loews Royal Pacific Resort at Universal Orlando this coming October!