Carolina and Edmond tied the knot during their Treasury on the Plaza wedding in St Augustine, Florida. The two envisioned a luxurious wedding filled with Albanian traditions to be celebrated with their friends and family.

Saint Augustine is a special place for my two lovebirds, as we captured their engagement photos down the historic cobblestone streets and darling fountains. During their engagement I found out that Carolina and Edmond first met while Carolina was waitressing finishing up her nursing degree. Edmond by chance happened in the little shop she was working at and was immediately stopped in his tracks. He was in love.

True love at first site seems so captivating and rare. Edmond knew it was Carolina he had been waiting for his whole life. Asking her out was easy enough, but with Carolina’s school schedule she wasn’t able to finalize an official date until a few months later. Edmond though continued to pursue her even as she played hard to get – well inadvertently hard to get due to school. Ever since that first cup of coffee during their first official date, the two became inseparable. That night they chatted for over four hours and realized that they had found ‘the one.’

Love at first site soon followed with a proposal to be remembered. On March 25th of 2015, Edmond called Carolina into their living room while she was getting ready for their date that night. Edmond just couldn’t wait any longer and holding her hand, bent down on one knee, and said to Carolina, “I love you so much and thank you for being here for me.” He asked for her hand in marriage and of course Carolina said “yes!”

Their wedding was just as romantic as their love at first site. Our day started off with capturing the venue details pre-reception uplighting in its natural beauty. The large columns surrounded beautiful wooden chivari chairs. Hidden behind the white curtain sits the original vault from with the Treasury was a true treasury. Of course later on during the reception it was uncovered for guests to ‘ooh’ and ‘aah’ over by how unique the piece was to the venue. Carolina came in shortly after we arrived and we immediately began bridal portraits of the girls popping champagne bottles and Carolina getting in her dress.

It was a beautiful moment as mom held back the tears buttoning her daughter in her wedding gown. Soon followed with another touching moment as Carolina and Edmond shared their first look down the aisle that would soon be used for their ceremony. Edmond could not hold back the tears either and the emotion between our couple was just jaw droppingly beautiful. Their love filled the room for everyone to take in and be a part of such a special time.

Formal portraits were knocked out prior to the ceremony and our couple quickly departed behind the curtains before guests arrived. Their ceremony included a special reading from one of Carolina’s bridesmaids and a candle lighting including Manny, Edmond’s son. It was very important for Carolina that Manny felt as a part of their wedding as much as Carolina and Edmond did.

Following their ceremony we captured a few additional newlywed photos inside against the backdrop of the curtain since night had fallen. The two cuddled close before departing to have a quick cocktail before being announced into their reception.

A six course meal followed by many lighthearted Albanian traditions including waiving napkins as the bride and groom danced with each table, throwing money at the couple while they danced symbolizing a good fortune for their future, and a circle of the men in the family coming together to sing traditional songs made for an amazing time.

Our night ended with sweet goodbyes as our couple continued to dance the night away. Wishing these two a beautiful life together!

Venue: Treasury on The Plaza 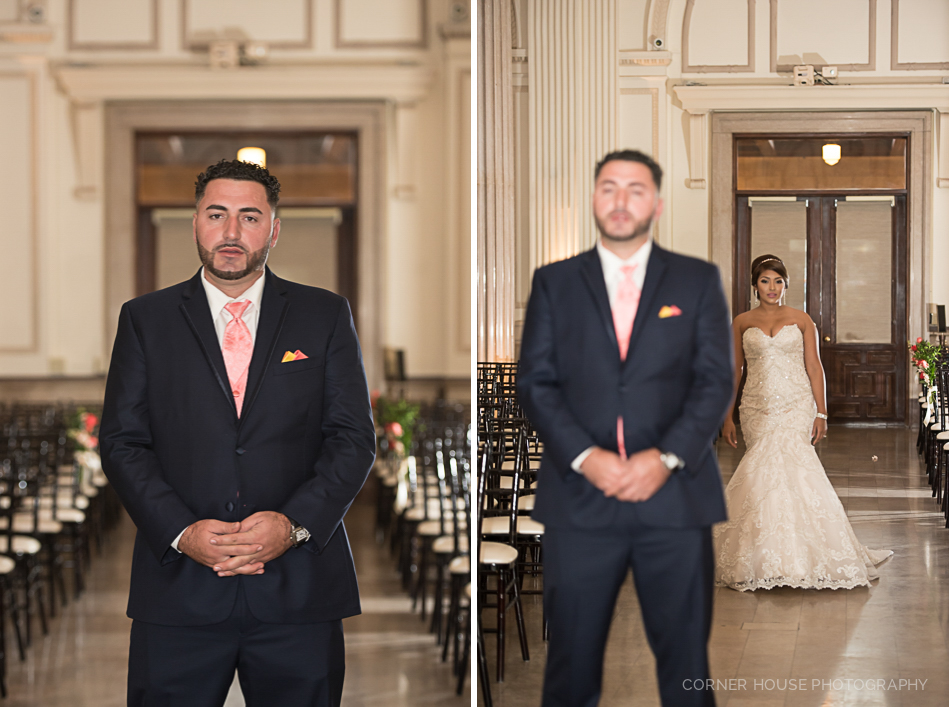